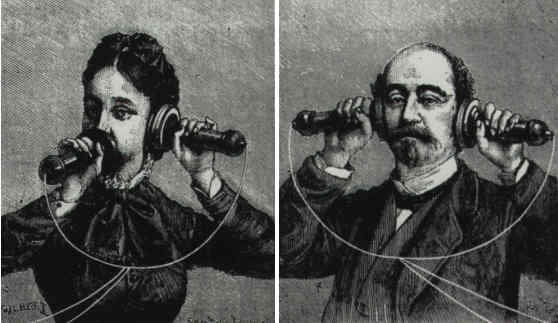 Rather than quoting the usual articles on the Bell Telephone that are to be found on so many Internet sites, I have chosen to relate how this strange instrument arrived in Normandy only a few months after its invention. You will realise, after reading these few lines, that the telephone was warmly received in France and would have spread as fast as in America, but the French State refused to invest any money. Consequently, it was a private company, the S.G.T. company "Sociťtť Gťnťrale des Tťlťphones" (or General Telephone Company) which developed the first French telephone networks.

"The Bell Telephone was introduced in France in August 1877 by Mr Brťguet returning from the meeting of the British Association for the Advancement of Science. The inventor himself offered Mr Brťguet, the two simple versions of the telephone which he brought back." (Journal du Havre). 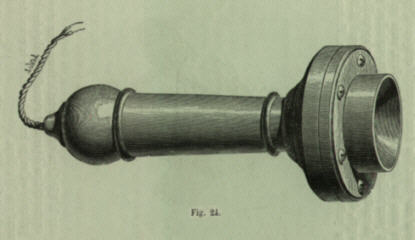 The Telephone comes to Normandy

In September 1877, the two brothers Alexandre and Louis Poussin, two Elbeuvian industrialists (from the town of Elbeuf in Seine-Maritime, France) read in a scientific newspaper called "la Nature", an article describing an "admirable instrument called the Telephone invented by the American Professor Mr Graham Bell". 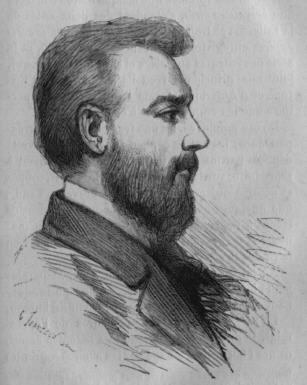 The Poussin brothers, very interested in the new scientific developments, went to Paris to meet Mr Brťguet. Amazed by the enthusiasm of Mr Brťguet who had just stated in the "Institut des Sciences" that "since I have had this magical little instrument in my possession, I have not been able to sleep", the brothers built a telephone with his instructions.

After trying it, they decided to share its benefits with the members of the "Sociťtť Industrielle d'Elbeuf". This society founded by their father in 1857, included the town's leading citizens, industrialists and tradesmen ... In December 1877, the newspaper "l'Industriel Elbeuvien" wrote : "today a telephone is at the disposal of the members of the "Sociťtť Industrielle". They can thus verify everything we have already said about this extraordinary instrument"". 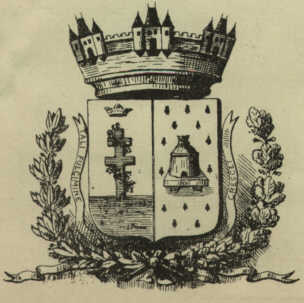 Coat of arms of the town of Elbeuf

The President of the "Societť Industrielle", Mr Pelletier, quickly appointed a commission to study the instrument. This commision organised a decisive experiment on 11 th December 1877 : a Bell telephone was installed in the premises of the society, a cable measuring approximately 600 metres was stretched from the St Jean tower and connected to a second telephone situated in another room in the building.
"The experiments carried out yesterday were a complete success. From a very great distance, in two sealed room, the members of the commission, divided into two groups, were able to correspond with each other. The sound, somewhat weak, was nonetheless perfectly clear and it was even possible to identify the person speaking. The gentle tones of a musical box placed in one of the locations could be clearly heard in the second location. The timbre of the musical box could be clearly distinguished. The effect was the same as if the music box had been placed at some distance from the ear." (L'Industriel ELbeuvien, december 1877)

The town of Rouen discovers the Telephone

On 12 th December 1877, Mr Gouault and Mr Dutertre, members of the Rouen "Sociťtť Industrielle" presented the Bell Telephone at a public lecture organised in the Town Hall in Rouen (Seine-Maritime, France). 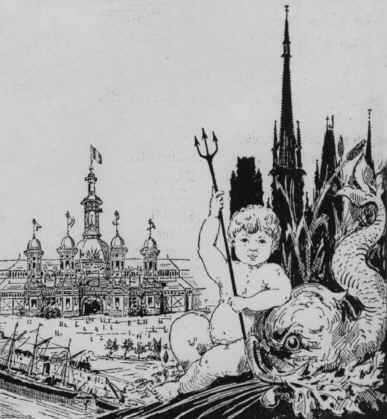 The 1884 Exhibition in Rouen

The Rouen "Sociťtť Industrielle" was described at the time "as a society open to all those wishing to study the applications of scientific discoveries, to promote technical knowledge and to popularisethe latest industrial processes, in other words, to all seeking to do enlightenment." It had a membership of nearly 700 of all origins. Each French department was represented, as well as most foreign countries (The U.S.A, Russia, Germany, England, Switzerland, Spain, Belgium, Holland, ...)

Mr Gouault presented the instrument : "The telephone which I am about to describe and demonstrate is the portable ear trumpet. It has the alternative functions of transmitter when it receives speech and receiver when it transmits the speech to the ear. The device is composed of a horn behind which a soft iron membrane 1 or 2 tenths of a millimetre thick is stretched between two circular wooden clips held together by copper screws. This vibrating membrane receives and reproduces the voice wawes. 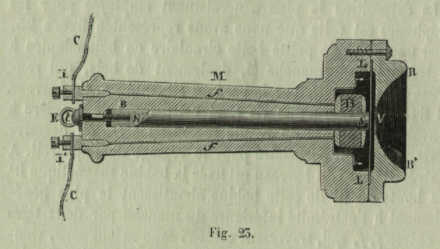 A fraction of a millimetre behind this membrane, we find a system consisting of a coil surrounded by an insulated copper wire and a central magnet. The two wires of the coil emerge from the wooden casing of the apparatus via two terminals. One of these is connected to the earth in the same way as a typical telegraphic apparatus." ( Bulletin de la Sociťtť industrielle de Rouen)
A less scientific description reads thus : "Mr Graham Bell's apparatus consists of two parts which resemble wood used for holding back curtains." !! (le Journal de Rouen, 1877)

Mr Gouault then explained the principle of the telephone : "The principle of a purely physical order was already known to science and was contained implicitly in Lentz's Law. Bell was the first to find a practical application for this."

Finally Messrs Gouault and Dutertre carried out a series of experiments which were successful. They showed that it was possible to carry on a conversation over some distance, with a second device placed in the police station situated over 300 metres from the lecture hall. They also presented their long-distance experiments. 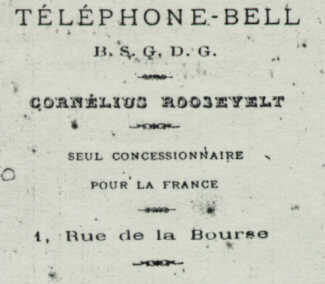 Mr Gouault ended his lecture by presenting the possible first applications of the telephone : " In the near future it will replace the speaking tubes in private houses and factories. during military campaigns it will be useful for front-line posts and for aerostats on reconnaissance missions. It may even be used in battle when it is developed further. It will have the great advantage of requiring no telegraphist and of enabling the general in command to have direct contact with his officers who are engaged in combat. It is already suitable for use during practice on the shooting range where it can replace the telegraphist language of bugle blasts. Finally Mr Graham Bell is experimenting on applications for the transatlantic telegraph and he is convinced that these will soon be successful".

The next day, Mr Gouault organised a second public lecture. In his annual report published in January 1878, the president of the society wrote that " the great number of people who attended the lecture testified to the succes of our colleague's lecture given the day before". The Journal de Rouen described the lecture : After recalling the fact that a mere town had been the forerunner of the telephone, the orator then presented the instrument and described its components in detail. He explained how the sounds were transmitted whenever our sensesare placed in different circumstances but nevertheless similar, as far as the material resultant is concerned, they transmit the same impressions to the brain and we believe that we are in an identical situation. That is why patients with an amputated limb think they can feel sensations in their lost limb and with the stereoscope we have a three-dimensional vision of a flat image". 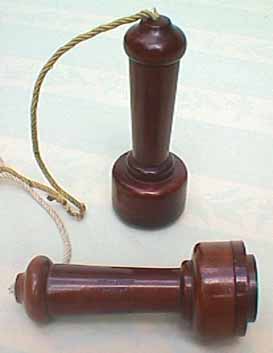 With the help of Mr Dutertre, the speaker carried out many successful demonstrations before giving some philosophical reflections on the applications of electricity :

"With the telephone, energy is transformed into electricity and vice-versa. Perhaps one day the heat from the sun, the energy of water falls or winds might be used in the same way to create electricity. Should we not foresee the day when coal, at present our sole source of industrial energy, will run short ?"

"This lecture which was listened to in silence since the slightest outside noise could impede the perception of sounds in the instrument, ended with a warm vote of thanks addressed to Mr Gouault by the president and with the unanimous applause of the audience". 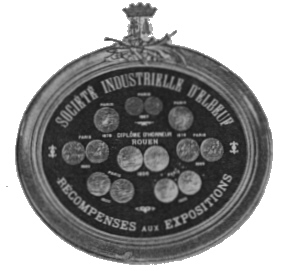 Finally, thanks to the help of the Inspector of the Telegraph Service in Rouen, Mr Gouault roused the enthusiasm of his audience. Did he realise at that moment, that he was about to make the first business call in Normandy and probably the first French press release ?
The Bell telephone was connected by a wire from the Sociťtť Industrielle building to the Telegraph office and then to the Elbeuf Rouen Telegraph Line. Here is the event as recorded by the Bulletin de la Sociťtť Industrielle :
"Communication was made with the lecture hall and the telegraph office at the Saint-Sever station in Rouen. Around half past ten in the evening, Mr Gouault transmitted the following phone message : President of the Sociťtť Industrielle d'Elbeuf to the President of the Sociťtť Industrielle de Rouen. A very interesting lecture on the telephone was given this evening by Mr Gouault, an engineer. Connected to Rouen, thanks to the collaboration of the Director of the Telegraph Service, the lecturer is now sending this oral message to be released to the press :
A fire which threatened to spread rapidly, broke out in the rue de l'hospice this evening. One worker received serious burns to his arm and chest. The fire has now been brought under control.
This message was repeated word for word by the person receiving it in Rouen. The transmission had worked perfectly".